His feet barely dropped on Iraqi soil when his heart started palpitating with its internal jihad.  The civilians and soldiers bustled passed Fletcher Adams as he bent over slightly to pace his heart beat.  His head swam in second thoughts:  family and friends he left behind, music that he missed playing, and devotion to leading the youth of camping trips.  Fletcher felt sick for the first time since his training as a peacekeeper six months ago.  He emptied his stomach in one strong decisive heave onto the tarmac of Baghdad International Airport which just changed its name from Saddam International Airport and returned to civilian control.

The tall, awkward, lanky silhouette of Fletcher Adams drew itself on the glass encasing the Hudson News & Gifts.  Taking his sweet time just like his 3-days of delayed flights, he slowly scanned the visible headlines without picking up the rest – U.N. Secretary General Kofi Annan declares Iraq war illegal; Intelligence report delivered to Bush warns of civil war. Bush’s response: the CIA is “just guessing;” Death toll of U.S. soldiers in Iraq passes 1,000.  Fletcher took another breath of normalcy as he continued scanning.

Fallujah, a city of mosques, located forty miles west of Baghdad woke up to the familiar cascading sounds of call to prayer rippling through the city as muezzins sound the adhan.

Over coffee with my best friend
Drinking out of a
Gigantic funky mug
And nibbling cookies and cakes
I look at you with
Dreamy droopy eyes.

Her back to me
You look back at me
In amusement and wonder
Drinking out of a
Gigantic funky mug
And nibbling cookies and cakes.

Our senses tickling each other
We sit forward
I take my sandal off and
Rub the back of my legs
And you run your hands over your dimpled chin.

I pout my lips as if to
Disagree with my best friend
Then I lick my lips slowly
Eventhough they weren’t chapped
You sit back
Hands caressing your chest.

Blinking in fluster
As if in mock shock
I fiddle with my hair
Straighten up playing hard to get
Hands up you tell me
You are backing off.

I look up from the coffee mug
Into an intense gaze
Making me warm up
I take my scarf off
A drip of sweat on my upper lip
I like what I am feeling.

You reel me in and we touch
In our illusion
Doing everything we wanted to
For the last hour and half
You wipe your sweaty forehead
And I, the nape of my neck.

Damn it – my best friend in view
She is paying the bill
And you are paying yours
She drops your arm around her waist
You walk by me and turn around to speak
I meet you half way with a gaze
Nice flirting with you. 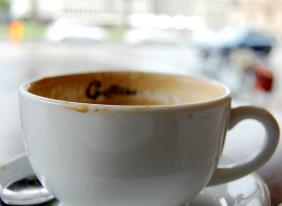 Your face is a fantastical mystery
And your voice enticingly seductive
Carries m away from here
To the land of fantasies.

There seems to be a parallel world
That I long to fuse together
But the run away train keeps running away
Leaving the tracks apart.

All of a sudden the train stops
And my work holds truth in witness
To the long walks on sandy beaches
To the gorgeous sunsetting over yonder.

There seems to be a world of duality
That I don’t want to keep separate anymore
Where the masquerade begins by nightfall
The players leave at sunrise, still masked.

All ver again I am in your world
Of loving words and soft types
As the eagles soar above us in lazy circles
Around the dreams we relentlessly type.

But then with the click of a mouse
My world remains parallel
As my computer is ready to shut down
Your face remains a fantastical mystery.

Shallow rivers of tears
Drying out the sorrows of the heart
Muteness is the only way to speak
Shattering glass the sound of
The life wanting to be lived.

Fragmented years that have
Loops that traps
Struggling for air
Covered in the silence of all the
Serenity that is no more.

The path shines luring
The body into the unknown
Spirit hovering away
Out of sight and into the darkness
The light blinks.

Heart makes no sense
Wanting a life of love and memories
It wanted to come back to
The beautiful small of making love
To the face hovering above.

Never has the body been so
Scared and stiff to relax
And touch the beautiful faces
In perplex wonder at who I am
Now that I am dead.

My bones drumbeat
Calling on the healer
Stirring in my body
Ancient knowledge of many
Taking roots in my wisdom.

I listen to the drums beating
The Serenity Prayer
In the pits of my being.

The healer takes notice
Unknown to the wisdom
Forgotten knowledge stored away
I see in the reflection
Somehow I understand
And shake it all off
Remembering how strong I am
Yet stumbling along
Into the wilderness – blankness.

She left the house on a cloudy day
With shades on her pretty face
Last night I heard her cry next door
And he said but babe we took a vow
For better or for worse
I really did not mean to hurt you
It is just that my worse is when I am drunk.

She left the house to sell her car
With two bus and a rail ride to work
Last night I heard her sob next door
And he said but babe we took a vow
For richer or for poorer
I really did not mean to hurt you
It is just that I can’t pay the bills when I gamble.

She left the house a broken woman
With rags of pride hanging behind her neck
Last night I heard him kick her out
And he said but babe we took a vow
For love or for hate
I really did not mean to hurt you
It is just that I really hate you when I am with another woman.

The institution of hanging till you die – the sham union
Till your pride and honor is commercially shredded
Until that day comes when you stop wondering
What is this really all about that should it be so mangled
She left the house in a body bag
With a smile on her bloody face
Last night I heard her scream as the gun fired
While he said but babe we took a vow till death do us part.

Stuck clock on the wall,
Wondering, pondering
If there is anything past the last call.

Brick wall on the building,
Standing, meandering
When there was time that moved.

Stoic building across the beltway
Glowering, towering
Where there was my back yard.

Father, I am a son of Appalachia just like you

I know that I am not the perfect son that lived

But my promise to you is true as the righteous son

Assuming his place and role that you have defined for me

Just like the fathers of Appalachia have done for their sons

My sons will become doctors to the ailing

As you would have wanted me to have done for those

Ailing in the toxic waters of the harsh mines

Where I was the son who vouched for your brother and

His son of Appalachia when the mine ceilings crushed

As a decent and honorable son of Appalachia

With dirt under my nails and sweat under my brows

So far apart, you thought I was the wrong son that wears on me

Father, don’t leave me now that I just got a new pass to be that

Decent and honorable man – a son of Appalachia.

My name is Tania Hossain. I am a penman, poet, photographer and philanthropist. This is my literary blog. I am humbled to share some of my literary and photography work with you. Thank you for taking the time to read scorpius odyssey. I have been writing since the early 1980s and have enjoyed a rich oral tradition of readings and recitations from my works. Since 2010, I have been working on moving into the print and alternative media and scorpius odyssey is a means to that endeavor.

My poems are mostly written on social justice issues such as domestic abuse, warfare, gender equality, freedom of speech and the likes. My plays pivots around social interactions and human dynamics such as one of defining friendship, coping with death by cancer, adoption struggles and on such matters. My novels are erratic from what I consider to be an epic novel to a sold out thriller and pretty much everything in between. Those works will take a life time to pull of the shelves and surrender them to some sort of a print format. Welcome and thank you for reading scorpius odyssey ~ it's all about the journey!

ONLY THE BEST FOR OUR CLIENTS™

Tips, Tricks and Inspiration for Your Perfect Day

Photography Is An ART: Blog

Photos, and maybe a geeky blog post or two!